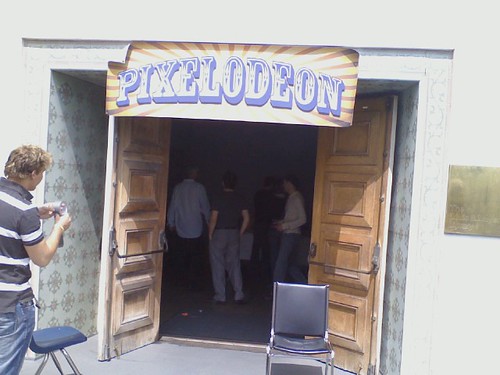 I’m still mentally processing everything that happened at Pixelodeon this weekend. I’ll probably spend more time on some of the more personal/technical/overall thoughts I walked away from it with on my own blog in the next few days but I wanted to follow up here by noting that it was one of the coolest events I’ve seen put on in LA, certainly one of the best conferences I’ve ever been to and the most interesting discussions I’ve ever heard inside the walls of AFI. Really everything about how this was put on was done right and the organizers deserve a huge round of congratulations for that. If you are at all interested in media or the web or creating video content of any kind or where all this is headed for that matter, and you didn’t swing by there this weekend you missed out in a major way. More thoughts after the jump.

First of all, depending on what you do with it the AFI campus can be the best of worst venue for your event. I’ve been to more than one thing there where the collection of people and set up of the building led to complete chaos and lots of people standing around awkward and uncomfortable. That was the furthest thing from the case at Pixelodeon. I think both Dave’s and my photos show that the environment there was anything but awkward or uncomfortable. In fact the organizers policy of making tickets only required for the keynotes, but the screenings open to anyone who showed up helped create a feeling that anyone could be a part of the discussion. On top of this, the keynotes were shown on a monitor in the lobby so even if you couldn’t get into the theater, you could stand out side and get a feel for what was going on.

I mentioned this a few times over the weekend but the best part of it was that the halls and sessions were thick with people creating things, excited about things they were creating, excited about things other people were creating, and looking forward to what was going to come next. It reminded me a lot of the early Emerging Technology conferences that O’Reilly put on, where no one knew where we were headed with these new web technologies but were excited to see what someone would come up with next. Recently most conferences I’ve been to are filled with suits arguing about business plans and exit strategies rather that the cool things that are actually being made. Pixelodeon seemed laser focused on the cool things being made and where that might take us as viewers, but also what the next wave of creators was going to to do an entire industry. There was so much excitement and energy because of all of this that it was really hard to find a corner where someone wasn’t talking about something super interesting that you just wanted to jump into the conversation about.

Like I said I’ve got a lot more to say about this but it’s way more conceptual and less LA Event related so I won’t take up space here with it but I’ll update this post with a link when I post more. Thanks Pixelodeon!

5 thoughts on “Pixelodeon 2007 was the bomb. But in a good, non-terrorist kind of way.”