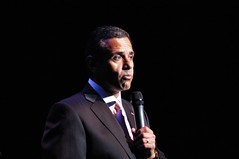 Mayor Villaraigosa is now officially swingle according to the LA Times.

“I want you to know that I take responsibility for what is happening and I feel a personal sense of failure about it, and that’s all I’m prepared to say on this question,” Villaraigosa said at the news conference, where he was joined by his brother, sister, nephew and two adult daughters.

That gives credibility to this anecdote from an otherwise questionable Rush Limbaugh:

It turns out it was the mayor of Los Angeles, Antonio Villaraigosa, and so we chatted for a while, and while I’m chatting — now, this is hilarious. While I’m chatting with Villaraigosa, I kind of slid to the right in my half-moon booth, and as I did that, that created some distance between me and my guest. I’m talking with Villaraigosa, and when I’m talking to somebody in a very loud place like this, I have to devote full attention. I had to turn my head to my left, away from the action behind me, to hear what the mayor was saying. At some point during the conversation with the mayor, I looked to my left, and the former president was intently chatting up the woman that I was sitting with. He had leaned down, and his elbows and arms were on the railing of the booth, and they were in intense conversation.

Hopefully our mayor can avoid the shenanigans of Mayors Newsom and Guiliani.

…photo by StewartJames, used and modified under Creative Commons…

7 thoughts on “The Mayor Is Back On The Market”