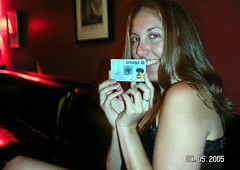 By now you’ve probably heard about the Hamburger Hamlet waitress who stole patron’s credit card numbers using a “wedge” or “skimmer” device, and then selling the info to a dude at $10 a number as part of an idenitity theft scam.

According to whats been reported, the woman only stole 40 credit card numbers. On the bright side, she was never paid the full $400 she was allegedly owed. On the dark side, I don’t believe she was only able to steal 40 numbers over her six week’s employment… unless the Hamlet really is that slow all the time. Its more likely that even more customers never noticed or successfully complained about fraudulent charges, or that additional numbers had yet been used by the thieves.

And, of course, worse of all is that this is one woman who was caught… credit card “skimming” is apparently a growing criminal tactic, so its a given that there are scores of similar criminals at work in the Los Angeles area, a city overflowing with underpaid, out of work actors trying to make rent, afford car payments, and pay back student loans who probably hate you anyway for leaving your tip on your credit card instead of paying cash… but I digress.

Anyway, the Consumerist has a couple videos of this scam in action.

Here’s a couple common sense tips to avoid getting your credit card ripped off:

…photo by pink_fish13, used under Creative Commons… and as a disclaimer, that isn’t the waitress who stole the credit cards, just some random girl who’s photo I found searching for “credit card” and “los angeles” in Flickr…