Early today a brush fire broke out on Catalina near the airport. It’s spread across hundreds of acres and nearly six miles to the city of Avalon. At this time it appears that one home has been lost and at least four other structures. Firefighters have been ferried in as hundreds of residents have been evacuating the island entirely. Catalina Express is running special all-night ferries to meet the demand. Other residents are still on the island, many evacuated their homes only to wait down on the pier as the fire fighting efforts continue just over the ridge behind Avalon.

I had a meeting down in San Pedro this evening so I made a quick zip down to the point to see what I could see. The smoke was quite apparent in the southern sky, as I got close to the Palos Verdes Peninsula.

Another photo after the jump.

Those evacuted from Catalina are being housed at two Red Cross shelters. Camp Pendleton is helping with the fire supression effort, especially with transporting firefighting equipment. 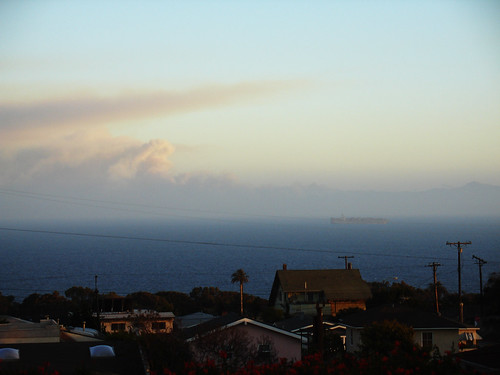 The LATimes has some really good coverage. Daily Breeze has even more.

2 thoughts on “Huge Wildfire Licks at Avalon as Catalina Burns”