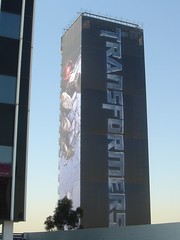 Tomorrow morning is the official “unveiling” of the building, even though it’s actually been done for several weeks now. I was too lazy to give an update until now, so I’ll also give you some news:

The unveiling of the building wrap! Be first to see exclusive footage and tour the Sector 7 Mobile Command Unit. Pick up advance screening passes to see TRANSFORMERS (while supplies last). Get your very own TRANSFORMERS action figure courtesy of Hasbro (available to the first 50 people who attend). Meet Tattoo from the Big Boy Morning Show on Power 106

I’d reported a month ago here on blogging.la that this building was being wrapped and provided a photo. I had reported that when it was done, one side would have an eye which would glow red at night. I was right about this, as I found out the other night… I could see the red eye beaming at night toward the east (Decepticon side). What I didn’t know was that that Autobot side of the building (west side) had a BLUE eye beaming at night. Kick ass!

Little did anyone know that the day after my original post, the winds would pick up and rip off one of the two completed sides of the building at the time (the Autobot/west side), as reported by Defamer here.

I’d been hoping to keep the unveiling tomorrow a secret so I could get there early enough to get tickets and a toy, but since the whole world seems to know about it anyway, I’m going to wish you luck if you decide to go.

If I’m not mistaken, I’ve already been inside the Sector 7 Mobile Command Unit (at ShoWest, back in March), so if there are any publicists for this movie who would like to send me some screening tickets and a toy directly so I can bypass the insanity of people waiting outside at 4am, I would love that.

6 thoughts on “The Transformers Building unveiling”