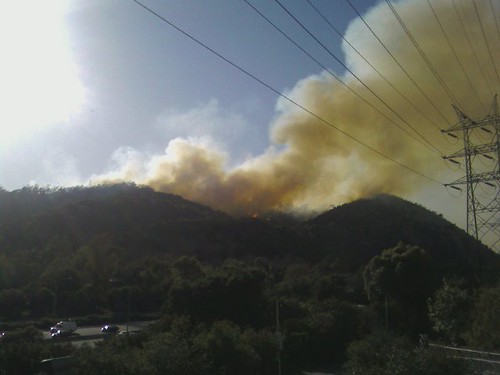 After seeing Mack’s initial “there’s a brush fire” post and his follow up “ok, maybe it’s a bit bigger” post I decided to take off from downtown and see what I could see since this is less than a mile from my house. I took a few shots on the drive home of smoke coming up out of the hills, unfortunately the internet was down at my house so I wasn’t able to post them so I sent them right to my flickr account and asked Mack to point you all there. I rode my bike over just north of Griffith Park Blvd near the bike path on the LA River to what I thought was a good spot to watch it everything go down. Caryn was nice enough to mention that I was live blogging it. Here’s the entire set of camera phone photos that I took. I also made a few posts to twitter as things were happening. There’s just a little shy of 50 of them and you can see a lot of progressions, though thanks to lack of a zoom you can’t see the flames that I could see in person. My clothes seem totally like smoke and it was pretty hard to breath there for a little while. You can see from the pics that the only other folks standing around there were professional photographers with way more reason to be there than I had with my crappy 1MB phone cam. The word they were getting from who ever was on the other end of their cell phones was that the fire was started by a homeless guy who fell asleep smoking and was burned very badly. When I left it was still burning (and I can hear sirens from my Silver Lake home still) but it was getting dark and my phone was dying. More news as it comes in – also check out Xeni’s post on BoingBoing for tons of updates. Last thing I heard it was still moving, headed down towards Griffith Park Blvd and that many parts of Los Feliz are powerless right now.

4 thoughts on “Phonecam shots of the Griffith Park Fire”