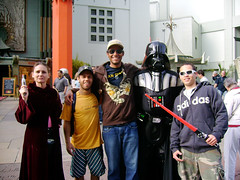 May the Fourth. Get it? Here’s some ways to commemorate the occasion:

Don’t be like Leia, and go kiss a Wookie. Just watch out for the headbutt happy Chewbacca that lingers on Hollywood Blvd.

Ladies, be like Leia and get a couple danishes from Stan’s Donuts in Westwood, pin them to your head, and wear nothing but a white sheet (or if you want to get fancier, make your own slave princess costume).

Buy your tickets for the Star Wars Fan Celebration being held at the end of the month at the LA Convention Center.

Check out the Star Wars/Star Trek improv show Star Force One at the Acme Theatre Company (Fridays at 8:30pm).

Dress up like C3-PO and try to get intimate with the R2-D2 post office box across from the Chinese Theatre. Photo-ops galore.

Show your nerd stripes by hanging around the California Science Center loading dock in case they’re getting rid of any props from the Star Wars exhibit that closed on the 29th.

Wear a Greedo mask into a bar, find the biggest dude there, kick him in the jewels, then while he’s down, whip off the mask, duck behind the bar, throw a bar rag over your shoulder and holler, “No blasters, NO BLASTERS!!!”

Hunt the freeways for this L.A. vehicle. When you spot it, mutter “I have you NOW, Skywalker!” and then open fire with your plasma cannons.

Go to Roscoes and start eating and don’t stop until you resemble Jabba the Hut.

Camp out or stand in line outside of Mann’s Chinese Theater just for the hell of it.

Perfect your Jedi mind trick by giving everyone subtle commands all day, no one will think you are weird, really.

Spend the night in a butcher’s freezer snuggled up inside the carcass of some large animal.

Make “Don’t Trust Lando” and “Greedo Shot First” signs and walk up and down Hollywood Blvd with them in protest.

Track down Wee Man from Jackass, stick him in a Yoda costume, and wear him in a backpack all day.

On a side note, some bloggers (cough, Celsius 1414, cough) contend that May 25th should actually be Star Wars Day, as its the date Episode IV: A New Hope was released. Maybe we can just agree and call this Star Wars Month? …photo by Francisco Neto used under Creative Commons.

3 thoughts on “May the Fourth Be With You”