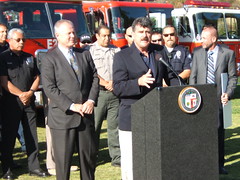 About fifty Hollywood Hills residents joined Tom LaBonge yesterday at Lake Hollywood Park to thank the men and women of our local fire departments for tackling the March 30th “Griffith Park Brush Fire”. The blaze was ignited by two teenagers playing with matches behind Burbank’s Oakwood Apartments, and quickly roared through the surrounding canyon threatening the Hollywood sign and neighboring communities.

Through the coordinated efforts of both City and County Fire Departments, the LAPD, and other city agencies, the fire was swiftly contained, causing no injuries or structural damage.

City Parks General Manager Jon Kirk Mukri was most impressed with how the various city agencies responded, seamlessly working together to handle what could have been a disaster. “If there wasn’t a fire you could have put it to music and choreographed it,” he commented.

Pointing out the quality and character of the men and women who make up the Los Angeles Fire Department, LaBonge said that while a senior at John Marshall High School he applied to be a firefighter, but was rejected.

LaBonge also introduced four of the helicopters that helped drop water on the blaze, moments before they performed a flyover, coming in from behind the audience and then breaking formation above the Hollywood sign.

Mayor Antonio Villaraigosa scheduled appearance was cancelled, which nobody seemed to notice as everyone in attendance was treated to a free hot dog from Pinks.

…more photos after the jump, or check out my full set here… 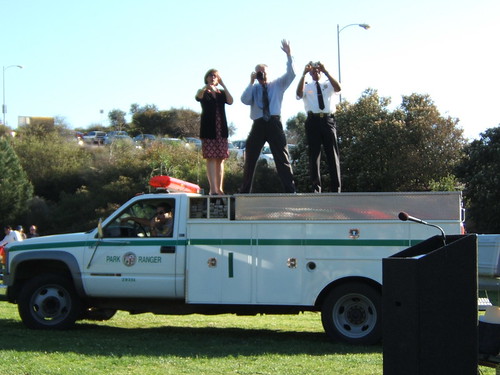 After the ceremony, Tom LaBonge had everyone in attendance join the firefighters and city officials for a group photo… to be taken by LaBonge himself. Here he is standing on a truck to help fit everyone into the shot. 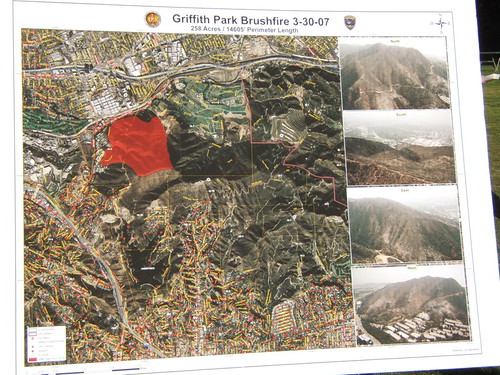 Map of the area impacted by the fire. 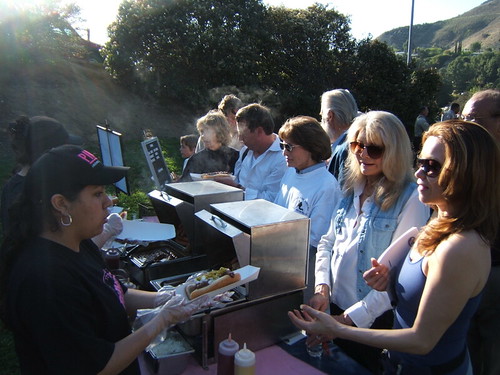