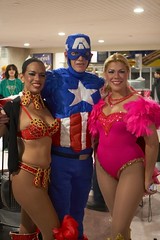 AustraliaFlorida may be trying to steal our thunder as a man dressed as Captain America was arrested there “for allegedly groping women at a Melbourne (FL) bar” (via Wired).

I was very sad to hear this happened outside of Hollywood (CA), where I delight in writing or reading about costumed characters being arrested for attacking or intimidating pedestrians. Heck, I’d even consider it a Metroblogging staple. (Elmo, Freddy Krueger, and
Chewbacca for starters).

But the Captain America story doesn’t end there – he also was found to have “a burrito stuffed in his tights.”

4 thoughts on “Does Captain America read Metroblogging LA and LAist?”