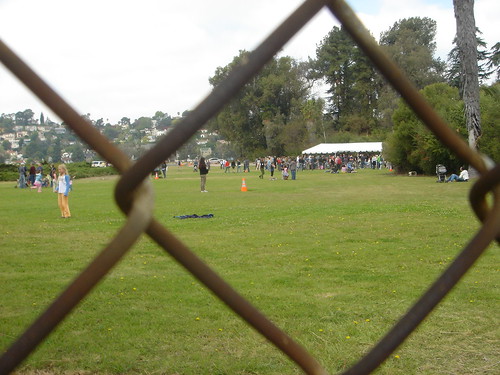 I was really excited this morning to head over to the Silver Lake Meadow since it was going to be open to the public for the first time in 60 some years. My initial plans to ride my bike (even with it’s currently sketchy breaks) was foiled when I found both tires to have gone flat while I was out of town. And then the truck wouldn’t start. So I decided that it was a nice enough day to just leash up the dogs and walk over. It’s about 2 miles exactly from my door step to the meadow so I was pretty relieved when we finally got there and I saw tons of people hanging out and tents and all kinds of stuff. Of course that ended when I wasn’t allowed to go in because I had my dogs with me. The security guard at the gate said that dogs were not permitted on the meadow. I mentioned that I’d just walked over and none of the invites I received said anything about that, but he held firm. I pressed a little further – “so you are telling me that I can’t take my dogs into the outside” “Right” When I asked why, he said “for sanitary purposes” to which I replied “So it’s OK for me to have them out here on the sidewalk, but I can’t take them into that lot that’s most likely full of coyote crap?” “Yes, you need to leave now”

So I got thrown out without even getting in, thanks to my 7lb miniature pinschers. OK, maybe my charming personality had something to do with it too.

16 thoughts on “No Meadow For You”