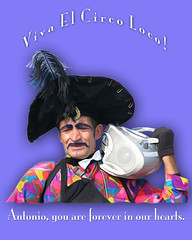 With this Sunday a year will have passed since the death of the flamboyant and beloved Silver Lake character known as El Circo Loco (aka Antonio Ruiz). I won’t burden this brief rememberance with anything too melodramatic other than to say that every time I’ve since passed the corners of Golden Gate and Sunset Boulevard where I most often saw him living his life out loud and leading his one-man parades I still look for him and I still can’t believe he and his colorful extravagence now live only in the hearts and memories of those who miss him so, like me.

Flickr photoset of the shrine erected where he died. And another of the community memorial for him.