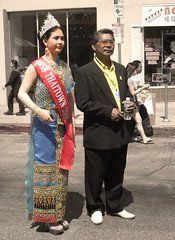 Zach at LAist regales us with a story of adventure from a day hike at Malibu Creek in Calabasas.

TJ Sullivan at LAO’s Native Intelligence reports back from a panel dicussion about the future of the LA Times, and that if “the 1992 LA riots were to occur today, it would be reported and viewed through the eyes of Los Angelenos on YouTube.com”, not the Times.

Don at L.A. Stories is hoping someone can loan him $300 million to buy the Cubbies, now up for sale. Maybe he can they rename it the Los Angeles Cubs of Chicago.

Andrew at Here In Van Nuys writes about his return to “the great equalizer”* known better as temp agencies. (*my words, not his)

Malingering shares an Easter tale from 2006 A.D. involving an BMW SUV, a homeless Easter bunny, and of course, pictures. (p.s., there’s an “easter egg” in the URL)

Ed Fuentes at View from a Loft discovers that the unique “Artist District” sign he took a photo of for LA City Nerd’s project has been stolen.