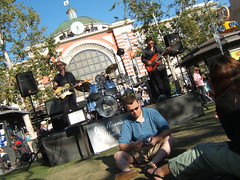 Pssst… not sure how much I’ll be able to “live blog” from the Grove, where the massive pillow rumble may or may not be happening at 6pm… but here’s some observations:

1. The clock tower above Abercrombie and Fitch, that was supposed to be what the pillow fighters would calibrate their watches to, is stuck at 4:35. Is this the first April Fool’s trick the organizers have put together? Maybe an effort by the Grove to stop the inevitable.

2. Judging by the number of security guards walking around, they didn’t get the memo that the pillow fight was “officially” moved to downtown Los Angeles.

3. The Easter Bunny is looking freaking creepy. He’s sitting right behind me, waiting for the next kid to be put on his lap.

4. A band is playing in the green where the pillow fight may or may not occur. “Morris Wade & Soundtrack” will be providing today’s battle theme. I see a pillow “hidden” in a drum on stage… this guy has clearly come prepared…

5. I haven’t seen anyone walking around yet with a pillow or bag suspicious enough to make me think they have one hidden… although this place is PACKED.

4 thoughts on “I’m a blogger not a pillow fighter”