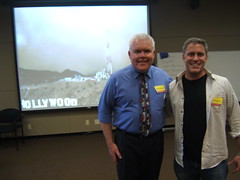 Ironically, yesterday was Brian Humphrey’s day off, and according to the LA Fire Department spokesman he couldn’t have picked a better day.

A few hours after he’d arrived at an online media conference at USC, two teens playing with fireworks sparked what the LAFD labeled a “major emergency fire” in the Hollywood Hills that quickly made national news. On any normal work day, Humphrey would have been taking calls from any number of media sources. Instead, he was calmly discussing how to improve the LAFD blog he maintains with other online journalists.

Also at Friday’s conference was Andy Sternberg of LAist (pictured with Brian Humphrey at right) who set up a live internet video feed on the projector for attendees to watch during a break.

After the jump, video of Brian Humphrey giving commentary to the live video of the fire…

Apologies (and thanks) to Brian for responding to blogging.la’s media request on his day off.

6 thoughts on “Fire Department Spokesman Takes a Day Off”