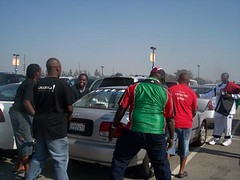 Not exactly sure of the story behind this photo by “onerebelgun”, except that the title is “lifiting a car that had parked badly so we could fit ours in the parking spot in los angeles.”

MetroRiderLA advises this Sunday’s marathon runners and spectators to avoid the buses and stick to the trains.

Justin Levine pays tribute and condolences to sound mixer Kevin O’Connell,  whose father passed away shortly after the Academy Awards. O’Connell also holds the distinction of having been nominated for an Oscar 19 times without winning, including on Sunday.

Sherman Oaks Councilman/LAist co-editor Zach Behrens kicks off “a new series of posts of pertinent local meetings where your surroundings might be affected” called “Get Involved”, starting with info on a meeting to discuss traffic crippling roadwork along Lincoln Blvd. in Westchester.

Wanna be a mascot or announcer for the Boston Red Sox? Well, you can’t… but the Sox’s farm team in northeast LA County, the Lancaster JetHawks, is looking for someone who can fill the suit of KaBoom, their purple feathered mascot, as well as two field announcers to pump up the crowds during homegames at Clear Channel Stadium. (via ValleyNews.com)

Atwater Village Newbie has been keeping up with the on again/off again elections and potentially shady happenings surrounding his local neighborhood council.

If you still haven’t gotten your fill of Oscar coverage, head over to Citizen of the Month who liveblogged the Academy Awards… from 1987.