The last Tuesday of every month the American Cetacean Society hosts a free public lecture, this month’s is probably of more interest to the general beach and marina-going public than many: 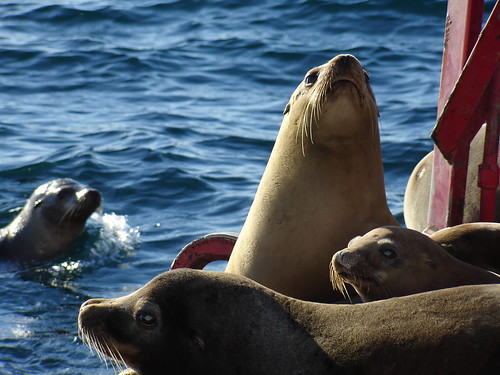 (Free to the public and free parking.)

So if you have a boat down at the marina and want to know what you can do to keep sea lions from sinking it, come on down.

The populations of California sea lions and harbor seals have increased dramatically over since the Marine mammal Protection Act went into effect in 1973. Contacts between humans and pinnipeds are becoming more frequent and the animals often cause economic impacts. The National Marine Fisheries Service is called upon to not only protect the marine mammals from harm but also to protect humans and their property from the animals. Our speaker will talk about what is being done to find ways to mitigate the problem.

Monica is the marine mammal biologist with the National Marine Fisheries Service (NOAA Fisheries), Southwest Region, in Long Beach, California. She is responsible for the management and conservation of marine mammals including, but not limited to, reviewing and preparing comments on the Marine Mammal Protection Act and Endangered Species Act permit applications, small take regulations and Incidental Harassment Authorizations, and providing assistance in managing impacts of expanding pinniped populations. She has a Bachelor’s degree in biology from the University of New Hampshire and a Master’s degree in Biology (Molecular Ecology) from San Diego State University.

If you don’t make it to the lecture, I’ll likely have some reportage on it come Wednesday morning.

4 thoughts on “How do you keep them off the pier now that they’ve seen Santa Monica?”