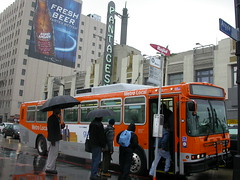 In an effort to capture some good, lazy PR, a score of Oscar attendees will be rolling up to the red carpet in hybrid and electric vehicles.

Global Green USA has lined up 30 cars to shuttle the likes of Leonardo DiCaprio and Davis Guggenheim (director of “An Inconvenient Truth”)… to the star-studded ceremony in Hollywood. (Mary Milliken, Reuters)

While I’m not going to question their desire to help the enviornment, I think there’s a more practical, effective, albeit radical way for them to make statement:

Take the bus to the Oscars.

Granted, the biggest drawback here would be that celebrities would arrive en masse, instead of being staggered with every limo and car that arrives individually. However, the true social benefits could be staggering:

The benefits for the MTA barely need be mentioned, and they’d be well served even if they had to pay for the privilege. The product placement alone would be priceless.

…photo by So Cal Metro…