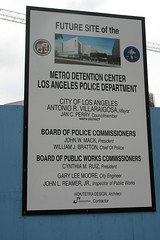 A large part of the problem with gang culture in Los Angeles is that gang members view a prison term as a badge of honor, and in some cases a right of passage, instead of what it should be: a deterrant to committing crimes and living the gang bangin’ lifestyle.

Fortunately, in July 2005 the state of California took a small step in making prisons more uncomfortable by banning cigarettes. Their reason: “to improve work conditions and cut rising health care costs among inmates.”

I have zero evidence to back up that the fear of not being able to smoke has had any effect on reducing crime. But it is making inmates go the extra length to get their fix, as Officer.com reports that a single pack of contraband cigarettes “can fetch up to $125.”

Darren Cloyd is nearing the end of his 15-year sentence at California State Prison, Los Angeles County, for second-degree armed robbery. Before the ban he remembers paying about $10 for a can with enough rolling tobacco for dozens of cigarettes. Now one contraband cigarette can cost that much.

“The black market is up here,” said Cloyd, 37. “Everyone and their momma smoke.

One thought on “Does crime pay (enough to afford cigarettes)?”