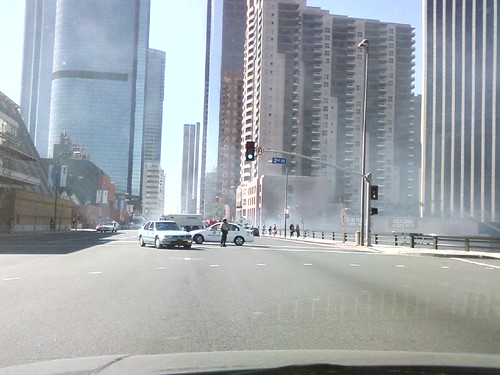 This morning around 11am my commute down Grand ave was interrupted by the scene above. What might not be clear is TONS of smoke, lots of security folks, an armored car, and I think a few red vehicles with flashing lites though I couldn’t make out their markings. This was just south of the Disney Opera House and almost directly next to MOCA. The road was totally blocked off and we were all forced to turn around. I took a right at the first light and was passed by 3 LAFD fire engines and 2 ambulances following them. They seems to be in quite a hurry. I looked around but didn’t see any news about what was going down, and with the LAFD blog on hold for a while I turned up nothing. Anyone have any insight?