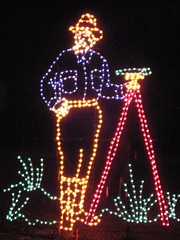 Water is the life blood of every community. The man who did more than any other to furnish that vital element to Los Angeles is William Mulholland… Every time a faucet is turned the water it releases is a reminder of the man whose life was devoted to public service.

Last Thursday, Mayor Villaraigosa and other city officials celebrated the return of water to the Lower Owens River for the first time since 1913, when William Mulholland diverted the flow of water to feed the Los Angeles Aqueduct. Mulholland’s project contributed in no small part to Los Angeles becoming a metropolis as it not only provided the city with hydration, but also power. It also left Owen Valley’s farmers with a dustbowl.

Fifteen years later, the St. Francis Dam, part of the aqueduct system also engineered by Mulholland, collapsed, unleashing a wave that killed over 450 people, in one of the greatest civil engineering disasters in the United States history.

Mulholland, who had begun his career as a ditch cleaner for the the DWP, took full responibility and resigned from his position as head of the agency. He died seven years later.

In spite of his characterization as a villain by many, Mulholland’s name is most synonymous with the boulevard, indicating that his contributions to Los Angeles may outweigh the tragedies he was part of.

With that, I ask – William Mullholland, city hero or public enemy?

3 thoughts on “Question of the Week: William Mulholland, city hero or public enemy?”