Like everybody else who lives in our city I have wondered what exactly causes traffic and is there anything that I can do to stop it? Is it just due to volumes of cars, or is it due to people’s bad driving habits? Mostly I have leaned towards the latter. That people drive in such a way that generates traffic. 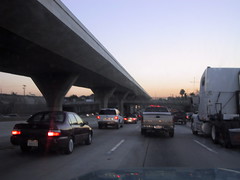 Obsessive lane-changing would be my number one guess as to the culprit. People who decide that they need to try and shave .5 seconds off of their hour long commute by switching into the lane next to them, only to slow it down when the person they cut off is forced to slow down, and when fifteen other impatient fools in rattling imports try the same maneuver.

Anyways, regardless of the exact maneuver, I have always thought that it was impatient drivers who create traffic and every time I see this I think to myself that if I ever run for mayor I will run on a platform of draconian traffic laws to stop this. Or at least give people who drive like crap higher insurance premiums or something.

What I am trying to get to is this…Traffic Wave Experiments…wherein an intrepid traffic researcher goes into the field and notices that his calm, collected behavior on the road actually reduce traffic around him. That by resisting the urge to be impatient he can dissolve the standing waves that are traffic. I like this. It almost makes me want to hop into a traffic jam to try it out. I think that we all should try stuff like this, and then pass it on to others.

I am sure that there are other ways that we, as Los Angeles citizens, can help fight traffic. What are your ideas? Besides “get off the road” or “ride a bike”.