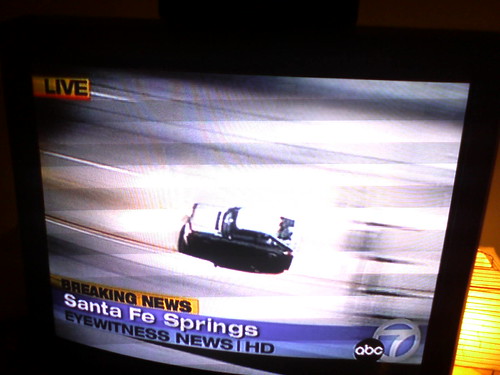 Tuned into the Channel 7 news at 11 to find this high speed chase already in progress. Apparently it’s been going on since about 10PM and they seem to have scrapped all the other news because this chase is the only thing they’ve shown for the last 20 minutes. In that time he’s gone from Pasadena down the 110, to the 105 east, to the 605 north and now he’s on surface streets. I guess they think this driver is a murder suspect or something, it’s really hard to tell because the anchors on Channel 7 are pretty much just making shit up at this point in order to keep talking. Seriously. “He’s in this Honda, he’s driving, he’s still driving, still in the honda, we don’t know the name of the suspect or if he has any weapons in the car with him, no word if he has a sandwich or anything else in there either, looks like he’s still driving in that honda and…” And on that note, it’s over – 11:25 the dude crashed through a fence and about 97 LAPD officers jumped out and grabbed him. That’s that.