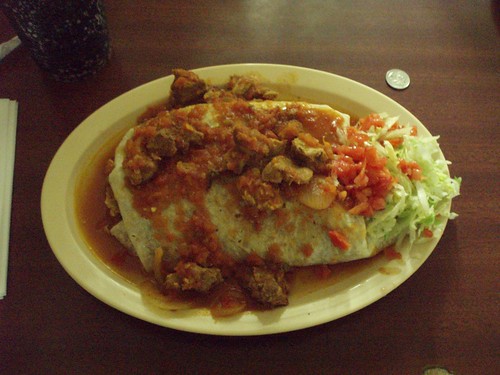 Anyone who’s been to Boyle Heights’ landmark El Tepeyac probably has a good idea what’s pictured above. For those of you who haven’t, it’s their $6.65 Hollenbeck burrito. Though as much a mass-terpiece of savory tastiness as structural engineering, its extreme biggity (note the quarter next to the plate for scale) is nothing compared to the Manuel’s Special version that’s easily and ridiculously more than twice this size. In some cases just the simple act of contemplating the solo consumption of either a Hollenbeck or a Manuel’s Special sitting there before you is almost enough to take your hunger away. Almost.

Not so in my case as I had prepared for the occasion, making as much room as possible by subsisting on raisins and altoids throughout the afternoon hours. In herniated hindsight, the plan to bike up there from downtown by way of Lincoln Park, eat this thing and then bike back home was a bad idea right up there with lead balloons and Rocky Delgadillo’s run for state attorney general and I want to take a moment to offer condolences to any of my fellow IAAL‚Ä¢MAF’ers who struggled home like I did variously feeling as if I’d eaten a brick or been shot in the kidney or both.

In theory, the idea to deviate from our regular Thursday evening bike rides that end (key word there: end) with sushi in Little Tokyo was viable. The flaw came in the inhalation of somewhere in the neighborhood of 70 cubic inches of flour tortillla-wrapped goodness then having to pedal myself cramping up from all that additional cargo eight more miles home to Silver Lake… what was it Ren would always tell Stimpy? Oh yeah. Bingo.

But enough fuss about the food. Of interest was our being questioned while ordering by a pair of hipstery dudes already dining who were curious as to where we had biked from and what we were about. After divulging that highly classified info we were about to eliminate them when we learned that they too happened to do a lot of biking, one ride in particular that originates by the Happy Foot/Sad Foot sign at Sunset and Benton Way Tuesdays around 9 p.m., which got me pondering after they left: Could those gents be the same ink-stealing duo of the Unnamed Bike Gang that our illustrious leader Sean stepped to and called out to no avail a couple months ago? I think an infiltration some upcoming Tuesday night may be order. But no more burittos for awhile.

Almost forgot! After the jump, links to more pix and the route traversed, plus proof that we’re uniformed now, hell yeah!

More snapsare here in this set on Flickr. And our route is charted here on Gmaps. And our shirts arrived: