During last night’s weekly IAAL‚Ä¢MAF downtowner bike ride we successfully gained access to the Gold Line (first time around, not so much), rode the train to her last stop on the far eastern edge of Pasadena, then cruised south under a big moon through the darkness learning along the way that apparently in this section of the San Gabe Valley the wealthier the neighborhood the greater the lack of street lighting.

Onward we pedaled to our primary destination: Mission San Gabriel, which is celebrating the 235th anniversary of its founding today. Taking a reverential look around before departing to retrace on wheels the nine-mile route Los Pobladores took 225 years ago last Monday from the mission to the place where L.A. was born near Olvera Street, we found the following signage on the gate to what looks to be an awesome cemetery : 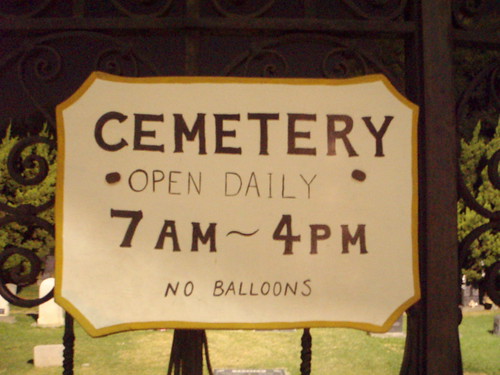 With all respect, is that anti-balloon stance a religio/socio thing? Call me crazy or out of touch or both but from my seat over her in the protestant pews, colorful rubbery things inflated with carbon dioxide or helium are pretty much the positively hell no very absolutely final wouldn’t-even-cross-my-mind last thing that I would bring with me to such a place as this. I’d bring a yo-yo or a sock puppet to a graveyard before even daring to consider something as heathen as a balloon. As such I’m just a little bit curious as to why the good people of the mission had to lay down such a restriction? Is it a sin of some sort? A clash between the church and the cultures of various pro-balloon ethnic factions in the area? And if you do dare arrive at the cemetery with balloons in hand, is there a place to tie them up outside while paying your respects within? Or must they be destroyed before proceeding? These are the questions that keep me up at night. That, and how many ridazz are gonna be onhand for tonight’s Swarm The Pier ride? And where do I go to get a life?

A few more pix from El Paseo de la Noche de los Bicycladores are here. And this is the route we took.