During last night’s pirate-themed Midnight Ridazz “Take No Prisoners” ride, it happened not long after the route south from the L.A. River Bikeway brought us through the nether regions of Atwater Village and out to Riverside Drive. It happened after two LAPD officers stopped our forward motion so that the helplessly jammed up automobile traffic could disperse, and during the blockade for whatever reason the coppers interrogated me in particular:

What’s your destination? I lied and said I wasn’t sure that it was either LAX or the taco truck on Beaudry and Second or Amoeba Records or all three but not necessarily in that order. How many are you? I lied and said around 4,000. Really? I lied and said maybe even 5,000. Wow, that’s a lot! And I lied and said yeah and this is one of the smaller rides and I blamed it on the opening of “The L.A. Riot Spectacular” movie. Smaller rides? How often do these happen? And I lied and said every Friday. And who’s responsible for organizing them? I lied and said it’s underwritten by a grant from the John D and Katherine T. MacArthur Foundation but that the main organizers were Councilman Tom LaBonge, documentarian Ken Burns and Larry from Sit ‘n Sleep Your Mattress Superstore. Smart guy, huh? I lied and said no sir. And what it this ride called? I lied and said Live 2 Bike/Bike 2 Live. Is there a website? I lied and said yeah, live2bike dot org or maybe dot com but definitely not dot net. Not dot net? Heck no — and with the number 2 not spelled out. Number 2 right. OK… move along.

And so we did as we were so ordered and there was a fair amount of snickering and then what I want to tell you about happened not much further south on Riverside where I was passing a group of cyclists stalled out at the curb and someone yelled out to me “Do you have a wrench?” And I did so I stopped and came back and told no one in particular that I had a 9/16″ socket and someone said “thank gawd” and asked me my name and shook my hand and a few moments later in the shine of my 30-watt headlight I was loosening the nuts of the rear wheel of a bruised cruiser and then patching up the tube and putting it all back together. In the middle of it all people are calling out “Daryl” and I’m thinking they’ve somehow mistaken that for my name until I finally look up and realize there’s no mistake. Two things stand out about the Daryl they’d been addresssing who stood next to me as I returned the bike to rideability. First Daryl isn’t a dude. Second, her last name is Hannah.

Being that I’m no suck-up it’s not like I got all ga-ga over my proximity to this slice of celebrity. In fact, I just mostly went back to work wanting instead to minimize how far behind I got from my fellow IAAL‚Ä¢MAF mateys. Sure, I’ll admit to thinking “Dude I’m fixing Daryl Hannah’s bike!” And I’ll cop to getting all gee-garsh-golly when the job was done and the patch job held air and an appreciative Hannah caught me in a surprise bear hug and accompanied it with a kiss on the cheek, but other than that I was all business. Hell, after pointing her toward an off-route shortcut to help her catch up with the ride’s masses I just got moving on down the road without so much as a goodbye.

A couple miles down where Riverside becomes Figueroa over the river there was another group dealing with a flat on the bridge and while stopped to help them with a patch Daryl rolled on by. Catching up to her on North Broadway coming into Chinatown I chatted with her a bit about something we had in common: visiting the mountain gorillas of Rwanda. She gone recently and posted a vlog entry about the experience on her website . Last summer my wife Susan and I went gorilla trekking there as part of our honeymoon.

She told me she was doing tonight’s ride for an upcoming vlog entry about bike culture she has planned for her site and we continued onward down Broadway into the civic center running red lights as we approached the theater district via a moment of Hollywood confluence that occured just after 3rd Street when Daryl was on my right and the Bradbury Building where her replicant Pris gymnastically battled Harrison Ford’s Rick Deckard in “Blade Runner.” When I pointed the historic building out, she didn’t recognize it.

“I don’t think I’ve ever seen it without the columns added for the movie!” she said.

We continued on down to 7th Street and then west out of downtown eventually joining up with the tail end of the mass of riders. At some point I pulled ahead of her (this time I regretted not making a proper farewell) and reunited with my fellow MAF biking buds regaling them with my travels with Daryl until we arrived shortly thereafter at the ride’s appropriate conclusion: the HMS Bounty on Wilshire. Aarrgh! 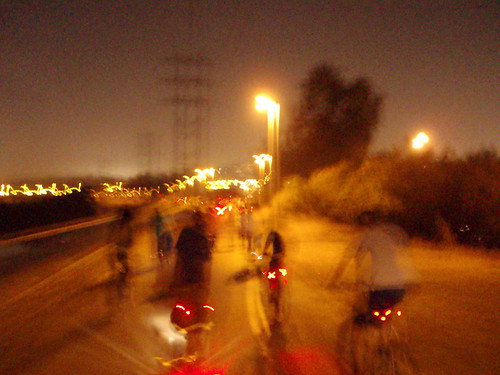 More of my pix from last night’s ride are here in a set on Flickr.

7 thoughts on “Daryl ‘N Me: A Moment Of Hollywood Confluence”