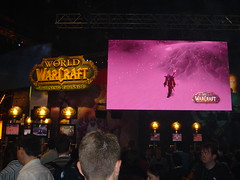 After two days at e3 I’ve seen just as much of the World of Warcraft booth the video game world that I can stomach. While this year seemed a little less poundy-music and flashing-lights than previous years it was still pretty headache inducing for the most part. I did meet many cool folks and see some pretty interesting things none the less. Heck, even Dave Navarro was there. Since I’m still totally fried from it all I’m not going to spend any more time on it than that, but I will point you to the fantastic coverage at LA Voice. Mack has been there pounding the floors as well and even though I was hoping to bump into him he must have never made it to the World of Warcraft booth our paths didn’t seem to cross.