Surely we have all seen, or perhaps experienced the joy of eating a hot dog wrapped in bacon from a streetside vendor. They broil to perfection in their casing of bacon, and are topped with onions, mayo, mustard, onions, green peppers and ketchup – and of course a nice grilled chili. A Los Angeles classic. 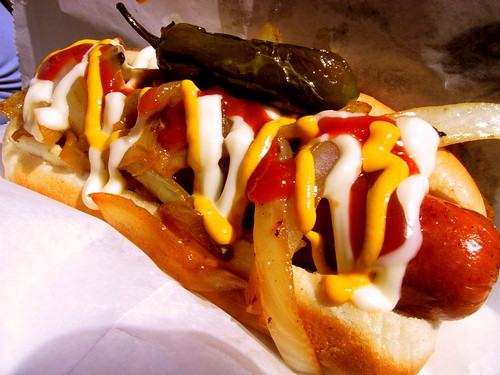 The population of the street vendors grows as you head east. I have found what I believe to be the biggest concentration in downtown Los Angeles, in the Fashion district. Many people also are familiar with them after a night out in Hollywood, where they are also abundant. They have even shown up at anti-war rallies.

As much as we like them, they are apparently illegal, and busts have occurred before(and have made some vendors squeamish about photos), much to my chagrin. Update: Losanjealous Ryan sends in a report of another bacon wrapped bust that he witnessed…

Despite all that, I think that they are here to stay. And for that I am glad.