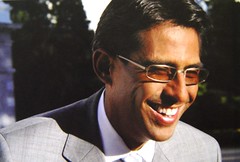 On the first day of my spring break, I decided not to sleep in. Instead, I made my way downtown to the Cathedral of Our Lady of the Angels to former Assemblyman Marco Antonio Firebaugh’s funeral Mass.

I arrived 10 minutes after the start of the Mass. Parking at the cathedral had filled up. Outside news crews and several CHP officers on motorcycles waited.

When I entered the cathedral, the priest was giving the homily. I found a seat behind several students in sweatshirts bearing university logos at the north end of the church. I thought surely they were some of the many students who benefit from AB 540. From my seat, I could see row upon row in front of the altar full of mourners.

A small mariachi played some songs throughout the bilingual Mass. A young man read a prayer for social justice. It surprised me to hear a prayer asking for a woman’s right to choose and marriage equality in a Catholic Mass. As LA Observed noted earlier, there were several important political leaders present including Senators Gil Cedillo and Martha Escutia, Speaker of the Assembly Fabian Nu√±ez, Liutenant Governor Cruz Bustamante, and the Governor.

At the end of the Mass, former state senator Richard Polanco gave a eulogy. At one time, he was Firebaugh’s boss in Sacramento. Polanco spoke about how Firebaugh went from being a kid in El Monte to head of the powerful Latino Caucus. He also spoke about the development of a bill that would grant undocumented students in-state residency for tuition purposes.

The first time around in 1992, the bill was vetoed by Governor Pete Wilson. As a result of sponsoring that bill, Polanco’s office was inundated with hate mail and calls telling staffers to “go back to Mexico.”

Firebaugh was elected to the Assebmly in 1998. He pushed the issue of in-state tuition for undocumented students just as he had when he was a staffer for Polanco. The first time the bill went to Governor Gray Davis’ desk, it was vetoed, but Firebaugh was not deterred from his goal. Polanco recalled that AB 540 was signed by Davis on October 12, 2001. The next day, Firebaugh’s 35th birthday, the bill was filed with the Secretary of State. Polanco said, “it was not a gift to Marco. It was Marco’s gift to the community.” At this statement, applause broke out.

Polanco’s eulogoy was followed by short reflections from Firebaugh’s brother and young daughter. Jesse Garc√≠a said that Firebaugh went to UC Berkeley and became a Chicano activist and never changed. His daughter, Tlalli Ariana Ornelas, said that her father would now be able to go bike riding and take long walks. She recalled that he wasn’t able to do this due to his illness.

Afterwards, the presiding priest blessed the casket with incense and the family processed out. Outside the main doors of the cathedral four Aztec dancers did the same and began dancing.

This past weekend I’ve seen profound examples of solidarity amongst Latinos in Los Angeles and around the nation. This morning, some of the same people who wore white t-shirts and marched downtown against HR 4437 donned black suits and skirts to pay their respects and honor the hard work of a man who dedicated his life to helping the community.

I hope Firebaugh’s leadership and dedication inspires many others.