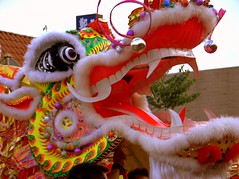 Despite an unsavory incident at the shuttles heading down to the Los Angeles Golden Dragon Parade in Chinatown(celebrating Chinese New Year – year of the Dog), I can say that good times were had by all. So this is a quick wrap up of the day. Even if others were quicker on the draw in getting their posts up, I figured that one more just couldn’t hurt.

After arriving at the parade route, I met up with a detachment of Ninjas, all of us ready and willing to shoot mass amounts of photos, which I can safely say that we did. Mr. T was in full effect that day, posing with many of the parade participants.

And the groups that did come through were remarkably varied: everything from high school marching bands to martial arts groups to councilpeople riding in Sebrings(Garcetti we missed you!). Pretty eclectic bunch, but no Falun Gong. But we did get to see Villaraigosa in the flesh. Nice.

Lots of fireworks. Lots of loud fireworks, which I loved, but many people could not take the heat. And St. Moxiee was there to hand out sparklers to the youth.

So that’s all I got for right now. Anyone else go?