Friday night, the L.A. Critical Mass took off from Wilshire and Western, and wound our way through the streets of downtown. We ended up going through Little Tokyo, around the corner to Olvera Street, and then through Chinatown, and out the other side. Which is where, riding down Main Street, we realized we were above the Not A Cornfield – and there were drums and fire down there! 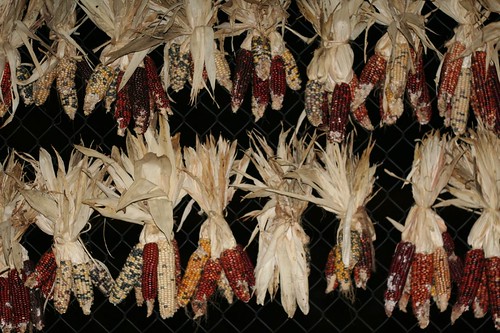 The corn is hung up to dry right now, but the field is still a field, and there was a harvest ceremony of sorts happening. Dance + Drums + Fire. And it was definitely surreal, to stand there, at the bonfire, listening to the drums, smelling burning sage (and other things) and watching the dancers go by, just outside downtown L.A.

One of the things I love about this city is how, in the core neighborhoods around downtown, you can go through layers of history so quickly. In half an hour, on bikes, we went from the 1920s buildings around Koreatown and MacArthur Park, past the turn of the century offices and neo-classical bank buildings in downtown, around the 150 year old buildings at Olvera Street, past the 30s art deco of Union Station, and finally into a Native-influenced harvest ceremony. I suppose that can be said of most cities – but I’m used to even newer cities than L.A., or cities that have done a more thorough job of purging their old downtowns, like Dallas. Seeing those leftover buildings represents, to me, a series of eras where the city vision was completely different from what came before, or what would come after, as the city’s population, ethnicity, finances, industries and technology shifted, again and again.

Anyways. The cornfield is neat. The Not a Cornfield, rather. If anyone is looking for a brisk February walk or jog, it’s definitely worth a loop around the paths for a couple miles of cardio.

And for those who want to join us on the next Critical Mass, L.A. meets at Wil/tern at 6:30pm, last Friday of the month. Santa Monica meets next week. Midnite Ridazz meets in two weeks. Come join us!

3 thoughts on “Fields of Gold”