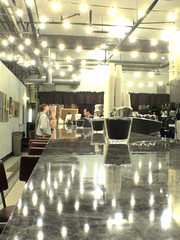 Eric over at blogdowntown is so on it it’s not even funny. I heard yesterday from a friend that this place was either open or just about to open and bingo, he’s already got a post up about it:

“This may not be news to those of you living in the Old Bank District, but last night was the first I had seen that Lost Souls Cafe is now open. I first mentioned its coming way back in June of last year after hearing about the project at a Neighborhood Block Grant meeting. It took a bit longer to open than they thought it would, but the cafe is now open and it’s very cool.

Both the alley the shop’s tucked into and the cafe’s interior have cool feels to them. The lighting is nowhere near as harsh as my bad photo would suggest. The menu definitely makes it a cafe, not just a coffee shop. And they have a naturally purple cake. I wanted some, but had just eaten.”

One thought on “New Eats in the Downtown”