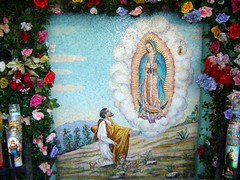 My parents and grandparents woke up this morning at 4 something a.m. I ignored them and went back to sleep. As much as I try, I can’t match my elders’ devotion to la Virgen de Guadalupe. They left to church to begin the festivities for el DÌa de la Nuestra SeÒora de Guadalupe. December 12 is a major holiday in Mexico and is celebrated the Mexican way: with a big party.

Ay my home parish, the celebration occurs on the Sunday before December 12. The day starts off at dawn with a procession, Rosary, and “Las MaÒanitas.” At morning Mass, mariachis play songs like “Las MaÒanitas” and “La Guadalupana.” The best part of the Mass is when the Aztec danzantes (dancers) enter the serene church and begin their dances in honor of la Virgencita. They command the entire assembly’s attention with sounds of conchas (conch shells), huehuetls (drums), and sonajas (rattles). Aztec dancing is always impressive, but in a Catholic church it takes on a different meaning. It shows that the civilization and customs the Spanish and Catholic Church wanted to stamp out still exist today.

After Mass, parishioners head over to the church hall to enjoy Mexican folklÛrico dancers, more music from the Mariachis and good food. I helped my mom make signs yesterday for the food sales. On the menu? Tacos de carne asada, sopes, tamales, pan dulce, hot chocolate, champurrado, and other typical foods. The dancing and singing stop long enough for children to re-enact the story of the miraculous events that occurred in December 1531, just ten years after the Spanish had invaded Tenochtitl·n and decimated the Aztecs with guns and disease.

Any Mexican knows the story, but it’s worth repeating. As with other stories of apparitions, the Virgen did not appear to a powerful person, but a poor man Aztec Indian, Juan Diego. On Friday, December 9, he was walking through the hills of Tepeyac on his way to Mass in Tlatelolco when he first encountered la Virgen.

The dark-skinned woman with the blue cloak of stars and a resplendent light around her asked Juan Diego to go to Bishop Zum·rraga to have a temple built at that spot. Juan Diego obliged, but the bishop didn’t believe him and made him ask the woman to give him a true sign to prove she was the Mother of God.

Now, Juan Diego was more concerned about his uncle, Bernardino, who was gravely ill with smallpox. He tried what he could to cure his uncle, but was not successful and a few days later, on the twelfth, he left to find a priest. As he walked through Tepeyac, he tried to avoid the same spot where la Virgen had first appeared, but this didn’t work. La Virgen appeared again and told Juan Diego that she had just shown herself to his uncle and cured him.

She called herself Holy Mary of Guadalupe and told Juan Diego to return to the bishop. Juan Diego told her he needed a true sign. She told him to go to the rocks and gather roses. Now, Juan Diego knew that there would be no roses in December, but he followed her instructions and found a bush full of roses in bloom. He gathered them in his tilma, a cloak used by the Indians, and returned to la Virgen. She touched the roses and arranged them to her liking. La Virgen told him to keep the roses untouched and unseen until he saw the bishop again.

When Juan Diego arrived to see the bishop, he showed them the sign he had requested. As Juan Diego opened up the tilma, the fresh roses fell out and immediately the bishop and his attendants knelt down in reverence in front of Juan Diego. There on the tilma was the now famous image of la Virgen de Guadalupe.

The tilma is now enshrined in the BasÌlica de Santa MarÌa de Guadalupe in Mexico City, but replicas of the image as well as the story have traveled throughout the world.