A garbage truck here in LA backed into his house and is seriously messing with his life. Does anyone have any idea how to speed up the repairs, or at the least get an “I’m Sorry?” This from Boing Boing: 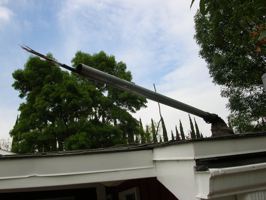 “Garbage men never have to worry about getting fired, no matter how badly they screw up. That’s probably why the Los Angeles garbage man who snapped my phone, TV cable, and internet lines, damaging my roof in the process, drove away without so much as a note with a number we could call. A neighbor saw the whole thing happen this morning. The driver shrugged and kept on going. ‘Not my problem,’ he probably thought to himself, assuming he had enough empathy to realize he had inconvenienced another person.

Now there are cables stretched across the road. I called the city, and they told me they’ll send me a paper form in the mail to fill out. That’s the city’s way of dealing with the problem quickly.

One thought on “Can someone please help Mark Frauenfelder?”